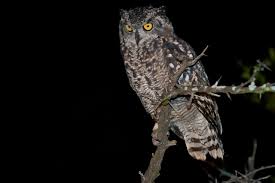 Since we moved into the Gorgeous Green House we have been in thrall of the regular night time visits of a magnificent Spotted Eagle-Owl.  He/she loves to use the screen on the house as a perch to hunt from. Not surprising, as we have their favourite prey (small mammals, birds, insects, frogs, and reptiles) in abundance. A little research led us to learn that, although this owl is not threatened, and has become well adapted to human dominated environments, many still die from human actions.  Top of the list are poisons (usually given to rats), cars, and people who fear them or wish to use their body parts in traditional medicine.  We were instantly inspired to try and attract our visitor to bring his/her mate and start a family.  Although we are fortunate to have a number of large trees in our garden we thought it might increase our odds by setting up a nesting box.

Nesting box No. 1 on the roof garden

That was over a year ago and there has been no interest at all!  Several wildlife experts have suggested that although the design is correct the position on the roof garden may be too exposed.  We had been so concerned about monkeys terrorizing the chicks (they are very destructive to other bird species in the garden) that we thought putting the box on top of a greased pole would be the business!  Apparently are fears are unfounded as most creatures that try to take an owl chick run the risk of being killed or injured by the highly protective parents.

Greg has been mulling over what to do with the left over bits of bamboo from the kitchen and decided to build nesting box no.2 and for it to be placed in a more sheltered position.

He has recently finished constructing the new work bench from the old doors in the house and has been itching for a project to break it in.

There are lots of plans on the internet we found ours here.  The result

is quite spectacular!  Fingers crossed that we’ve got the location right this time (side of the house but still good visibility) and perhaps this posh version will attract a couple looking for a more high-end abode. Just in time, October is the last month for breeding!

Complete with weatherproof roof and installed on side of house

This project took Greg less than 3 hours and we hope that you may feel inspired to make your own nesting boxes.  Alternatively if you are not DIY inclined check out your local resources, many cities/town have organisations that advice on owls that fly in your area and supply and assist people to get set up.

This months House and Leisure feature the Gorgeous Green House in its ‘Sustainability Supplement’.  You’ll need to flip to the end to find us on p.162.  Glynis Horning has described our journey well.  Pity the photos that were selected don’t link in a cohesive way to the copy.  Not sure what sustainability/green message there is in our bed image and where is the eco pool, veggie garden, bee hive….?  (sigh, Sally took so many amazing photos).  However, the vertical and roof garden do look spectacular and hopefully that will draw people in.  (Scroll to end for image of vertical garden).

This Sunday the Sunday Times are doing an ‘Eco’ feature. It will be interesting to so how they present our home and lifestyle.

Lastly, for followers outside of South Africa and those of you who may have missed the Top Billing TV coverage, here are the first 7 minutes of the show:

As I pull out the last three enormous and beautiful beetroot in the veggie garden I have pause to reflect on our first winter in the Gorgeous Green House. Spring is now upon us and it time to take stock of what has been fairly experimental but also haphazard time in the veggie garden.

The beetroot have obviously been a huge success but I didn’t plant anywhere near enough! Most of the carrots were planted outside the monkey cage as our cheekiest neighbors raid the obviously fruiting things like tomatoes and aubergine.  Not so, I came home one day to find 80% dug up and eaten (very messily too).  The survivors were transplanted inside the veggie cage.  They are very sweet and the funny shapes are very appealing. Know now for next time.

This bright and beautiful collection of organically grown produce is more than just a delicious supper.  The process of nurturing tiny seeds into this abundance brings such joy.  If you already grow food you know what I’m talking about!  If you don’t why not give it a try? Even if you don’t have a garden you could grow some herbs, lettuces or chilies in a pot for a sunny windowsill. I promise you, the potential for getting hooked is quite high.